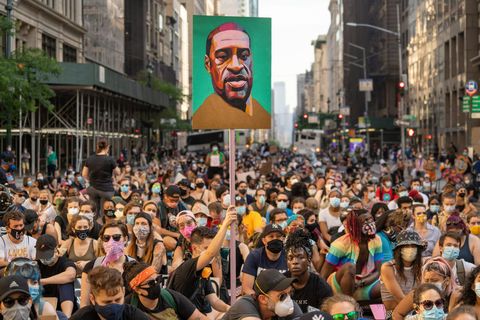 When Trayvon Martin was killed at the hands of a racist self-proclaimed vigilante, I was a sophomore in high school. I was fully aware of what was happening, and why the verdict was egregious. But I was also always going to this game, or that practice, studying for this test, and volunteering at this place. I avoided discussing it among most friends, mostly because it didn’t “affect” any of them. They didn’t identify. I grew up one of the few Black kids in a predominantly white suburban town in New Jersey. That was just how it was. But now, looking back, I resent the fact that I didn’t feel empowered enough to express the same outrage I did privately, or among my Black friends. Silence was the safer alternative.

To teenaged me, nothing could be worse than engaging in a “sensitive” conversation about the killing of an unarmed Black child with someone who didn’t understand the public outcry. Why would I engage with a peer who thinks there is nothing they can do about it? Nothing felt more traumatizing to me than outing my friends, co-workers, or even casual acquaintances as covertly racist. My circles would shrink, and I would feel even more uncomfortable than I already did in the spaces in which I existed.

Related Story
When Love Feels Like Playing the Lottery

Maybe it was just my high school. But I have a feeling it wasn’t.

When Colin Kapernick took a knee during the national anthem in 2016, I was a student-athlete playing softball for my university. Following a practice, I was told by my coach that I and another Black teammate weren’t permitted to kneel in support, and if we had any questions, we could discuss it in her office. Yes, she addressed the whole team—but she was talking to us. Kneeling was not something I’d considered doing—not because I didn’t agree but because the thought literally hadn’t crossed my mind until the choice was taken away from me. I was enraged. But I didn’t further engage in the conversation, nor did I go to her office to discuss how she could make assumptions about what actions we deemed appropriate in the face of nationwide uproar over police brutality. I didn’t ask how she, a coach at a “liberal” university, could demand a non-response without first engaging with the two athletes of color on her team. Nor did I ask how she could leverage her position of power as someone who decided the starting lineup to coerce us into silence.

I averted eye contact, and left practice. I seethed silently among my Black peers about the hypocrisy of it all.

Maybe it was just my coach. But I have a feeling it wasn’t.

Related Story
On the American Amusement Park for Black Trauma

When Stephon Clark, Botham Jean, and Jamel Roberson were all killed at the hands of police officers quick to open fire, I was working my first full-time job. I was busy. I was traveling. I grieved silently and among family. But at work I was visibly fine, because I had to be. So were my non-Black co-workers, among which I was the minority. While we agreed it was tragic and unjust, the lights at the office were still on, the doors still open. There were things to get done, and race relations bordered on too “political” for many, even in my albeit “liberal” industry. And like the dinner table, you just don’t discuss politics.

Maybe it was just my office. But I have a feeling it wasn’t.

Now, when Breonna Taylor, Ahmaud Arbery, and George Floyd are all dead at the hands of people who despised them, I’m unemployed. I was laid off at the start of the COVID-19 crisis, and now I’m in a quarantine induced by the global pandemic that is still ongoing and affecting people of color disproportionately. I’m in my apartment. I’m on my phone. I’m on Twitter and, though less so lately, on Instagram, constantly consuming every piece of information there is because I have nothing to do. I’m not working. There are no distractions.

And for the first time, quite possibly in my entire life, I’m able to fully absorb what’s happening. I have nothing but time to sit, and think. And rage. And cry. And think some more. Nothing but time to fully grasp that I live in a world where I am discriminated against every day because of how I look. In big ways and small, with microaggressions experienced on all levels—I now recognize that I’ve been left to cope in predominantly white spaces my entire life. I now understand how destructive it’s been to my healing.

I’ve fully come to terms with the simple fact that I am not safe. Neither are my older sisters, or my aging parents. My little brother—17 years old with the world at his feet, who some would deem a man in the eyes of the law, capable of wielding a weapon or threatening a life—is not safe. Nor is any Black person I know. Because myself, and so many others, got good at pretending that dismal diversity stats and a smattering of Black peers was enough. Or because we’ve come to label topics such as race too “political” to discuss in professional settings. Because we didn’t feel supported calling out small covert instances of racism when our desk mates described something as “ghetto” or joked about not going into certain predominantly Black parts of the city.

Sure, we talk about a need for diverse offices, classrooms, and teams. But where does that get us when we neglect to call what’s happening in our country by name?

I’m forcing myself to ask why the topics of race or police brutality are so polarizing in certain environments. Sure, we talk about a need for diverse offices, classrooms, and teams. We discuss how there are little meaningful contributions without a range of voices. But where does that get us when we ignore questionable comments, or office behavior? When we neglect to call what’s happening in our country by name? When we fail to acknowledge it amongst our employees, but are quick to post on the company’s social media pages about solidarity?

I’ve had non-Black friends and former co-workers reach out to check on me, and make no mistake: I’m grateful. But I’m more grateful that I don’t have to be “online” and at work answering emails right now. I’m grateful I don’t have to request PTO in order to deal with the plethora of emotions I’m feeling. Nor do I have to put on a happy face and pretend that while I’m Black and the country is in disarray over the value of my life, I don’t condone the demonstrations across the country. And I definitely don’t have to explain to the Slack channel how the language they use around these “violent” protests reinforces Black stereotypes and reveals their unconscious biases.

I don’t have to remark that I’ve never heard of a single revolution or movement that did not combine both violent and non-violent forms of protest. Or how when Black people are involved, it’s suddenly “not the way to do things” or “counterproductive.” I don’t have to give examples of how most of the protests only turn violent when police show up to “control” already calm crowds. I don’t have to share that article about how white influencers are masking their desire to “have fun,” drink, and “find a riot outfit” as activism. And I definitely don’t have to check this or that white co-worker when they fondly remember the Civil Rights Movement and MLK’s words, but neglect to acknowledge the “violent” protests that led up to the establishment of the Civil Rights Act.

I don’t have to educate, check, or reassure anyone other than myself. Now, with all this newfound time to think, I can say with confidence: I’m glad to be unemployed. If not for the realizations about myself and the world, then for the simple fact that I don’t have to pretend anymore.